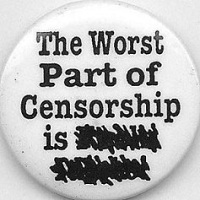 Last night, "The Revision to correspondence policy" was voted and approved by the majority of the Marinwood CSD board on October 13, 2015. Bill Hansell was the dissenting vote. The policy was suggested by our new general manager to "limit communications relevant to CSD business" He claims that letters to the CSD board have "been abused" by the public to "introduce items not relevant to the agenda and district jurisdiction" at a high cost of staff time. Tarey Read, said that it would be a "felony" to gift staff time to irrelevant topics of discussion. What is the cost of adding an email to a pdf? Guess who gets to decide if the items are "irrelevant"? The general manager and the CSD board, of course. It is a clear violation of the First Amendment to prevent, alter or suppress communications to the government.Bill Hansell in his dissent remarked that "more speech, not less" is a sign of a healthy local democracy. In his view, written correspondence is no different than "open time" for speakers, I agree.All other current Marinwood CSD candidates were in the room and none objected to the policy. Strange times in "do your own thing" California. I appreciate Bill's willingness to do the right thing.
=================
I believe in Free Speech.  I support the First Amendment right of everyone to redress the government even if I disagree with the content.  If elected to the Marinwood CSD, I will fight such anti-democratic measures like "The revision to correspondence policy" from being enacted.

I want to hear from you.

I believe in Democracy.

www.nestel4csd.com
Posted by Save Marinwood at 10:46 AM