Supervisor Adams joins pension system to get $19,000 a year

Supervisor Adams joins pension system to get $19,000 a year


Supervisor Susan Adams, who for years proclaimed she wanted no part of the county pension system, has enrolled in it four months before leaving office in order to get a $19,000-a-year pension.

Her about-face on what had become a key political platform surprised colleagues and infuriated pension critics, although few officials were willing to comment publicly.
"I was very surprised to learn that Susan Adams made this decision in light of her many statements in recent years about not participating in the county pension program," said Kate Sears, president of the Board of Supervisors.

As controversy swirled about spiraling pension expenses and a $784 million unfunded liability facing county taxpayers, Adams styled herself as the county's most frugal supervisor, repeatedly noting she was not enrolled in the pension program and was saving taxpayers a bundle.

"Susan has led by example on limited spending, always declining the county's pension for herself," an Adams campaign flier titled "She's looking out for us" proclaimed last spring.
San Rafael Councilman Damon Connolly, who ousted Adams from office effective next January in a landslide victory in June, said he had "no comment" on her pension situation.
﻿
News of Adams' change of heart surfaced a day before it was about to become public as part of a pension board agenda. The supervisor, who made no mention of the situation when she appeared at a county board meeting Tuesday, could not be reached for comment later in the week.

Adams, 57, who earns $107,000 a year, left word with an aide that she was tied up in meetings all day Thursday and could not be reached. She also was unavailable for comment Wednesday, when news of her pension was disclosed by County Administrator Matthew Hymel.

Adams left a three-sentence statement with Hymel, who gave it to the Independent Journal. "I'm not making any comment," Hymel said.

"I am making a personal financial decision to join the Marin County Employees Retirement Association and use approximately $143,000 of my own money to buy back my prior service time," Adams' note said. "If I had opted into the system almost 12 years ago, taxpayers would have paid for a portion of my required contributions. As it is now, I am paying 100 percent of the employee contribution plus interest."

The "buy back" perk provided by the system enables employees to boost their years of service, a key factor in pension calculations, by paying what they would have if they had been members of the system during prior public service.

Pension chief Jeff Wickman, who said Adams' "buy back" will come for routine approval at a pension board meeting Wednesday, outlined the supervisor's situation
"In August, Supervisor Adams exercised her choice, as provided under the County Employees Retirement Law for elected officials, to opt into membership with the Marin County Employees Retirement Association... . As a new member, Supervisor Adams has the option to purchase eligible prior service the same as all other (association) members... . She has opted to purchase all her prior time during which she served as a member of the Board of Supervisors."

The county last fiscal year contributed $53,000 each for the three supervisors then enrolled in the pension system, up from $42,000 each the year before, and $31,000 in 2009-10. Adams enters the system without the county contributing its annual share had she joined 12 years ago, but neither Wickman nor Hymel had any idea how unfunded liability will be affected.

"Supervisor Adams' membership information and projected benefit costs will be included in a future actuarial valuation," Wickman said. "For the service purchases, we do not calculate the projected increase in the unfunded liability."

Wickman provided a detailed breakdown of Adams' projected pension benefit, based on estimated earnings through December, saying that if she started drawing a pension as soon as she can, she will get about $1,591 per month, or about $19,000 a year.
Jody Morales, head of Marin's Citizens for Sustainable Pension Plans, called the turn of events "a farce."

Adams "has completely negated the one thing I admired most about her — not being part of an overly generous, out of control, broken pension system," Morales said. "What a sad way to end a career."

Sears, the only supervisor to respond to requests for comment, is now the lone member of the county board who does not accept pension benefits. "I can assure you I have no intention to buy back or join the program before leaving county office," Sears said. 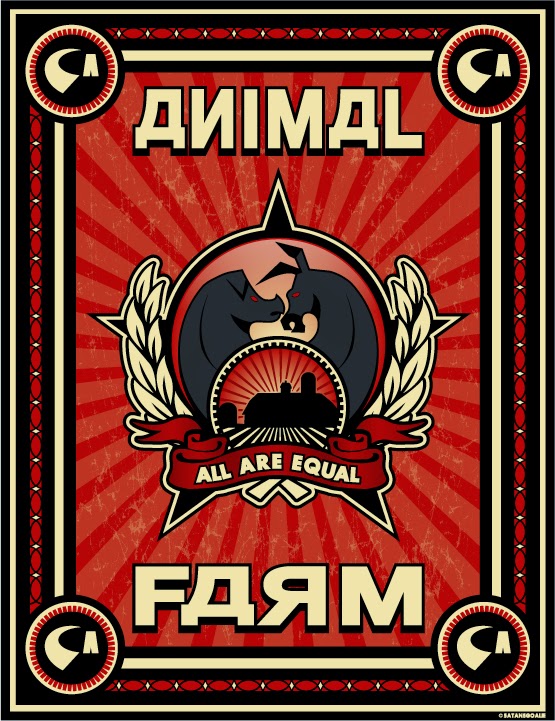 
A proclamation by the pigs who control the government in the novel Animal Farm, by George Orwell. The sentence is a comment on the hypocrisy of governments that proclaim the absolute equality of their citizens but give power and privileges to a small elite.
Posted by Save Marinwood at 12:00 AM