FABLE: The Wolf, the Nanny-Goat, and The Kid 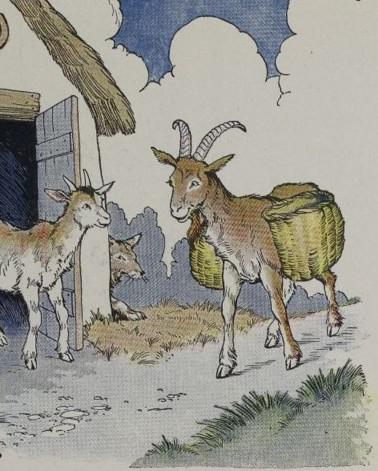 A Nanny-goat went out to fill her empty milk bag
And graze newly sprung grass,
She fastened the latch tight,
Warned her Kid saying:
"Do not, upon your life,
Open the door unless  you are  shown
This sign and told this password:
'Plague on the wolf and his breed!' "
As she was saying these words,
The Wolf by chance  prowling around,
Overheard the spoken words
And kept them in his memory.
Nanny-Goat, as one can well believe,
Had not seen the glutton beast.
As soon as she departs, he changes his voice
And in a counterfeit tone
He asks to be let in, saying: "Plague on the Wolf,"
Believing he'd go right in.
The  canny Kid looks through the crack,
"Show me your white paw, else I'll not open."
He shouted at once. (White paw is a thing
Seldom  seen in wolfdom, as everyone knows.)
This Wolf, aghast  upon hearing these words,
Went  slinking home the same way he had come.

Where would the Kid be now, had he believed
The password, which by chance
Our Wolf had overheard?

Two guarantees are  better than one,
Even a third one would not be extreme.

Better be sure than sorry
Posted by Save Marinwood at 9:39 AM