Dorms for Grownups: A Solution for Lonely Millennials? 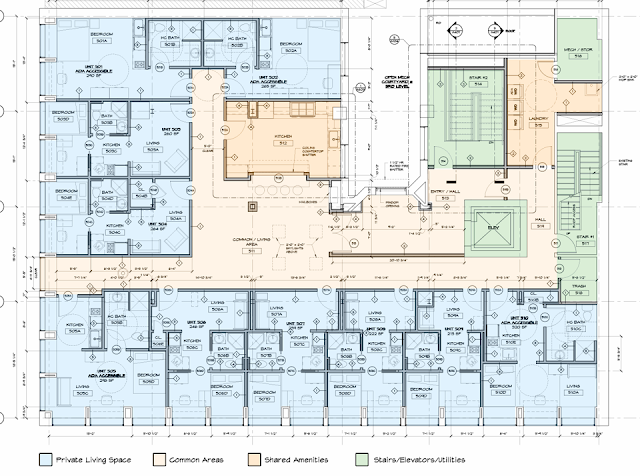 Dorms for Grownups: A Solution for Lonely Millennials?


SYRACUSE—This office looks like a pretty typical co-working space, what with the guy with a ponytail coding in one corner, the pile of bikes clustered in another, and the minimalist desks spread across a light-filled room. Troy Evans opened this space, CoWorks, in a downtown building here in February.
MORE FROM

Why Childcare Workers Are So Poor, Even Though Childcare Costs So Much
Borrowing While Poor
The Candidate Republicans Trust Most on the Economy: Trump

Coworking is probably a familiar concept at this point, but Evans wants to take his idea a step further. On Friday, on the top two floors of the building, he’s starting construction on a space he envisions as a dorm for Millennials, though he cringes at the word “dorm.” Commonspace, as he’s calling it, will feature 21 microunits, which each pack a tiny kitchen, bathroom, bedroom, and living space into 300-square-feet. The microunits surround shared common areas including a chef’s kitchen, a game room, and a TV room. Worried about the complicated social dynamics of so many Millennials in one living unit? Fear not, Evans and partner John Talarico are hiring a “social engineer” who will facilitate group events and maintain harmony among roommates.

Forget communes or co-ops. Millennials, Evans says, want the chance to be alone in their own bedrooms, bathrooms, and kitchens, but they also want to be social and never lonely (hence #FOMO).


“We’re trying to combine an affordable apartment with this community style of living, rather than living by yourself in a one-bedroom in the suburbs,” Evans, who is 35, told me.

Some parts of Commonspace are sure to appeal to twentysomethings looking for friends in the city. Evans plans to create an online recruiting process that will help him select applicants who fit into the community. Residents will be able to communicate with each other through Facebook groups and Slack channels, and will come together through weekly dinners and pub crawls and will be able to garden together on the rooftop garden.

The apartments will be fully furnished to appeal to potential residents who don’t own much (the units will have very limited storage space). The bedrooms are built into the big windows of the office building—one window per unit—and the rest of the apartment can be traversed in three big leaps. Residents will only have to sign up for six months to start. Evans and Talarico hope to also rent out some of the units on Airbnb to get fresh faces moving through the space.

The units will cost between $700 and $900 a month, which is slightly cheaperthan the going rent for a one-bedroom in downtown Syracuse, the two say.

“If your normal rent is $1,500, we’re coming in way under that,” Talarico said. “You can spend that money elsewhere, living, not just sustaining.” 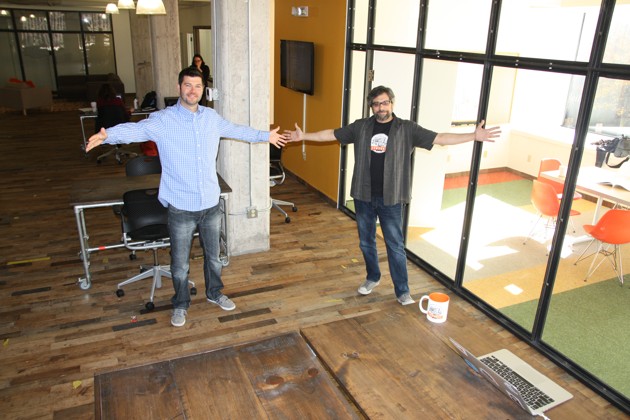 Evans, left, and Talarico show the width of a Commonspace unit (Alana Semuels)

Evans might be entering the market at the perfect time. Millennials are staying single longer than previous generations have, creating a glut of people still living on their own in apartments, rather than marrying and buying homes. But the generation is also notoriously social, having been raised on the Internet and the constant communication it provides. Indeed, more 25-to-34-year-olds live with roommates than have in previous generations, partly because rental prices have climbed while wages have remained stagnant.

But this is also a generation that has grown up with luxury, and may be accustomed to college campuses with climbing walls, infinity pools, and of course, their own bathrooms. Commonspace gives these Milliennials the benefits of living with roommates—they can save money and stay up late watchingGilmore Girls—with the privacy and style an entitled generation might expect.

Evans and Talarico aren’t the only ones trying out something like this. Pure House, which The New York Times called a “Millennial commune,” is a Williamsburg apartment building that also creates a networking and social community for its residents. Krash is a startup that invites entrepreneurs to live in a shared living space for three to 12 months in Boston, New York, or D.C. to jumpstart their connections. Even WeWork, the massive coworking space, is planning on moving into shared living spaces, according to the The Wall Street Journal.

But no other startup has combined shared space and micro units. Yet what makes Commonspace truly different is its goal of helping revitalize the downtown of a Rust Belt city that struggles with some of the highest rates of poverty in the nation. In cities such as Syracuse, Evans explains, people moved to the suburbs at an alarming rate, abandoning the downtown. Young professionals moved to the suburbs, too, because there wasn’t much happening downtown after dark. Evans lived in a Philadelphia suburb by himself after college and still remembers how lonely it was.

“We’re trying to make it a neighborhood in a building,” he said. “You’re not staying in your room watching TV all day, you’re eating in the restaurants, going to the coffee shops and the bars, and doing it as a group.” 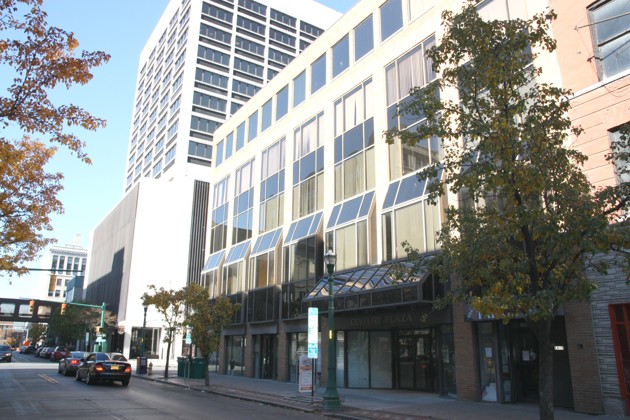 If this works, Evans, who is a real-estate developer, plans to expand to other cities in upstate and central New York. And maybe even Cleveland.

I asked Talarico and Evans how they planned to surmount what I saw as the biggest obstacle: People may like the idea of living with others, until they actually move in and get frustrated by loud music or annoying neighbors or that guy who always hogs the game room. The rooms are built to be extremely soundproof, they told me, and while the building might be designed for social activity, the actual apartments are built for introverts who want privacy. And of course, the social engineer is there to moderate disputes and kick out anybody who misbehaves.

Even Talarico and Evans, who consider themselves introverts, say they’ve learned to appreciate the value of regular social interaction. Evans, for example, went to school in Syracuse, but didn’t really feel like he had a community there until he opened CoWorks. Indeed, studies show that people in coworking spaces are happier and less lonely, and that their business increases because of the connections they make there. Coliving could have the same effect, Evans says, especially if people can have their social space and their private space, too.

The building even appeals to people outside the “Me Generation.” Evans says he’s had interests from all age groups, including empty nesters looking to be more connected to the city.

Michelle Kingman is one of the Syracuse residents interested in Commonspace. Kingman considers herself a minimalist—until she rented an apartment in February, all of her possessions could fit into her car, she told me. Now she and her husband Julian live in a two-bedroom downtown, and have turned one of the bedrooms into a pristine meditation space. They’d have to give that up if they moved into a tiny Commonspace apartment, but Kingman, who is working on her own startup, likes the idea of being part of a big neighborhood community in one building. And when she wants to escape that and retreat into her tiny microunit, she says, she’ll be able to.

“It’s the best of both worlds,” she told me. “You have roommates, but they’re not roommates.” 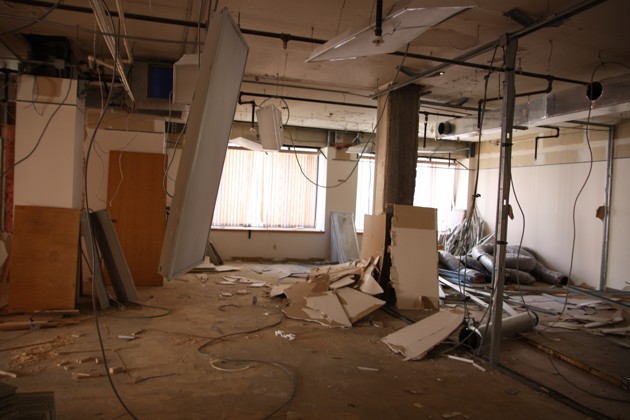 Construction has begun on the offices that will be made into living spaces. (Alana Semuels)
Posted by Save Marinwood at 5:55 PM